‘The story of 3-Institutes’ 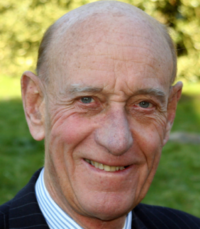 From the early days of his clinical training, Prof Williams knew he wanted to be a Hepatologist and followed his passion to better understand liver disease and find cures for it from the day he started to the very last days of his life, 25th July 2020. During this time, he has published over 2000 papers and has a H-Index of over 130. After graduating from Royal London in 1953, his first exposure to Hepatology was working with the late Dame Sheila Sherlock (1959), an experience, which inspired him to become a Hepatologist. He travelled to work in Columbia in 1961 where he studied approaches to quantitate liver function tests and learned to perform liver vein catheterisation. He returned to the Royal Free in 1963 where he published important papers on tropical splenomegaly which took him to Africa. He finally moved to Kings College in 1965, where he performed the bulk of the work that he is currently recognised for.

Such was his resolve and self-belief that within 4-years of starting a new Consultant post, Prof Williams started to hold the centre ground in Hepatology, coordinating the first liver transplant in collaboration Sir Roy Calne in 1968 against much opposition from his peers. This provided the framework for building the largest, the most respected and productive liver unit in the world, which has led the field for the past 55 years; such is his legacy. The work done by his group became the reference standard for other units around the world attracting the best in the field to Kings College. In addition to many firsts in liver transplantation, he was the first to describe recurrence of autoimmune diseases such as primary biliary cirrhosis and autoimmune hepatitis in the graft and the first to describe experience with use of Tacrolimus to reverse chronic rejection.

His seminal observations at Kings are innumerable but in my view the most important amongst them was the recognition that liver failure was a multisystem disease and required a multidisciplinary team to address its complexities. He used this knowledge and understanding to set up the first liver intensive care unit, which provided the training ground for many many Hepatologists in the world. He was the first to demonstrate that severe coma in patients with acute liver failure was reversible, an observation that created the rationale for transplanting comatose patients with acute liver failure. A huge contribution of this unit was to the accurately characterise the syndrome, which led to the development of poor prognostic criteria, that is still used world-wide to allocate organs for liver transplantation. His group developed novel management strategies for acute liver failure including the use of mannitol, N-acetylcysteine, renal replacement therapy and most importantly liver transplantation. His pioneeering work extended to cirrhosis; amongst others they described the Child-Pugh score and established sclerotherapy and banding for varices.

The Kings Liver Course was held annually attracting both young and older Hepatologists to Kings. It was at such a course in 1991 that I first met Prof Williams and was immediately inspired by the beauty of Hepatology as a subject, the deep understanding of pathobiology needed to solve the disease, the rapid advancement in our understanding and the massive opportunity to make a difference. It was at the end of this course that I decided to become a Hepatologist.

Most people hang up their shoes in the pursuit of leisure when they retire. Not Prof Williams. As he retired from Kings College, he moved to UCL to set up the Institute of Hepatology together with Prof Naoumov and Prof Vergani, where I had the enormous privilege of working with him for about 11 years. Starting from scratch at UCL, he built one of the most amazing Liver units, where the focus of activity was completely different to his work at Kings as he did not have access to Liver Transplantation, which was centred at the Royal Free. There was far more emphasis on Innovation and Translational research focussing on autoimmune liver disease, viral hepatitis, hepatocellular carcinoma and he recruited me from Edinburgh to build a liver failure group in 2000. Together, we first defined the existence of acute on chronic liver failure, discovered a novel therapy for hepatic encephalopathy (ornithine phenylacetate), which is entering a Phase 3 clinical trial, a liver dialysis device (DIALIVE), which has just finished a proof of concept study in patients, a toll-like receptor antagonist, which as due to start a Phase 2 study and a novel engineered carbon carbon (CARBALIVE), which has also finished a proof of concept study. Disagreements over the future between the Institute and UCL led him to leave UCL in 2010. He was now 78 years old. I decided to stay on with UCL.

His tenacity and quest for knowledge took him back to Kings, where he built the 3rd independent research Institute and this time his focus was on high-quality basic science research. He was able to convince Dr Shilpa Chokshi to move with him as the Chief Scientist and together they built unrivalled facilities for basic science research focussing on liver immunology, the microbiome, liver regeneration, cirrhosis and liver cancer. The model was to collaborate closely with clinical environments but excel in extremely high-quality basic science, an unmet need in Hepatology. Perhaps, his most important contribution over the past 7-years has been to lead the development the Lancet Commission, which brings together all the major stakeholders in UK Hepatology to try and define how to improve the care of patients across the country.

In addition to his love for Hepatology, he was a keen tennis player but more recently, it has been sailing his 35ft yacht competitively. He has received innumerable awards in his professional career, including the EASL recognition award he was due to receive this year; he was most proud of The Satanita Trophy, which was presented to the best performing boat, namely his – Jos of Hamble, in the Members’ Regatta of the Royal Yacht Squadron, that he received last year. Sailing was his true passion.

Professor Williams lived with his wife, Stephanie, a phenomenal lawyer. He had 7 surviving children, but sadly one died aged 37.  The tradition of Medicine in his family continues as one of his daughters is a Consultant Physician in HIV and he also has a grandchild now in a career in A&E.

His big vision for Hepatology, curiosity, leadership, booming voice and critical questioning will be missed by us all.