The overall risk of cancer in patients with inflammatory bowel disease (IBD) is similar to or slightly higher than (according to study populations) that in age-matched and gender-matched individuals from the general population. Some patients with IBD will develop IBD-related or IBD-drug-related cancers,1 but most cancers will be sporadic (Figure 1) and, therefore, patients with IBD should participate in national screening programmes, with the exception of IBD-specific endoscopic surveillance of colorectal cancer. 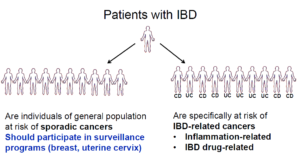 Table 1. State of knowledge on cancers attributable to IBD drugs

Patients at risk of future cancer

Thiopurines are associated with a risk of Epstein-Barr-virus (EBV)-associated lymphoma that is unpreventable during use, strongly increases with age, and is doubled in men, but which is reversible on drug withdrawal.3 This risk becomes quite challenging in men over the age of 65 years, who are also at increased risk of urinary tract cancers (especially smokers),4 with a number needed to harm below 10 for a 10-year period of treatment. So, we should consider limiting the duration of use of thiopurines in men older than 65 years.

EBV-seronegative patients, particularly young men, are at risk of fatal macrophagic activation syndrome5 and post-mononucleosis lymphoma.3 The European Crohn’s and Colitis Organisation guidelines suggest limiting the use of thiopurines in EBV-seronegative young men except those with severe uncontrolled IBD and no relevant alternative to combination therapy.6

Contrary to previous studies, a French nationwide study has recently suggested that the risk of lymphoma was increased twofold in patients exposed to anti-TNFs alone and sixfold in those exposed to combination therapy with thiopurines.2 This result will be confirmed or challenged in the ongoing I-CARE cohort.

IBD by itself is suspected to promote skin cancers and, therefore, sun protection and skin surveillance are recommended from diagnosis in all patients.6 Thiopurines strongly promote non-fatal non-melanoma skin cancers, whereas anti-TNFs mildly increase the risk of melanoma.7 These risks are two among many others (Figure 2), and dermatologists, who have the expertise for suggesting the relevant intervals between screening examinations, should be consulted. 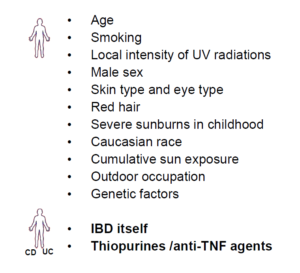 In patients just diagnosed as having cancer, the management priority is to cure the cancer. Immunosuppressive treatment should be paused. However, in patients with metastatic uncontrolled cancer and active disabling symptoms, the use of biologics can be considered, including anti-TNFs that do not strongly promote the progression of advanced cancers.

The priority here is to minimise the risk of recurrence of cancer, which would be fatal in many cases. The central point is to obtain from the patient’s oncologist the information on the risk of the early (5 years) and late (>5 years) recurrence of the individual cancer. If the risk of recurrence is substantial, given the importance of immunosurveillance and the experience of transplant specialists,8 it is suggested to try to pause the use of immunosuppressive IBD drugs for 2–5 years,6 except in patients with severely active disease without relevant therapeutic alternatives. Caution must be maintained in systemic cancers with substantial risk of late recurrence (some melanomas and breast cancers). For any IBD drugs used, prescribers should prioritise those associated with the lowest carcinogenic effects in general and that have no established impact on the carcinogenesis of the previous cancer.

In the early 200s, he initiated and coordinated the French observational CESAME cohort, which aimed to better understand and prevent all cancers related to IBD and/or to immunosuppressive treatments. With the Saint-Antoine tertiary care centre team, he is engaged in clinical research on natural history and complications of IBD. He is currently compiling data from various data sources for assessing the mid and long-term benefit-risk ratio of immunosuppressive therapy in IBD. He is also Head of the Scientific Committee of I-CARE, a European prospective observational cohort on IBD outcomes. 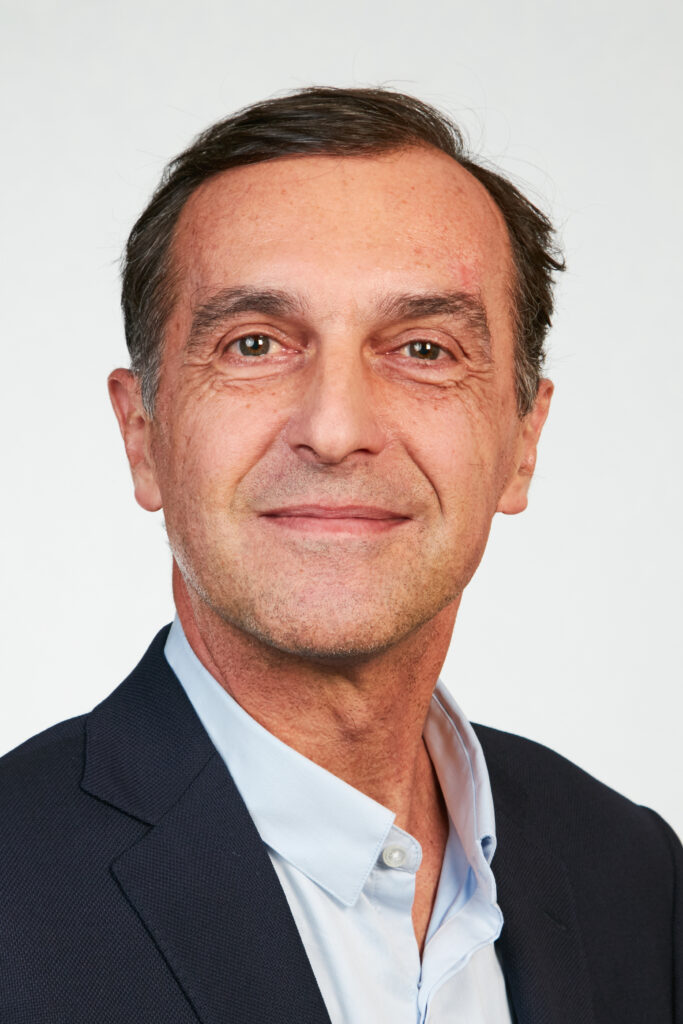