The development of varices represents a state of altered portal circulatory haemodynamics in cirrhosis, which arises from increased vascular resistance to portal venous flow and secondary ‘dynamic’ responses of splanchnic vascular tone. These convert the portal venous pressure system from a low-pressure system (<1–5 mm Hg) to a higher-pressure system (>5 mm Hg). If the portal pressure gradient progresses to >10 mm Hg, portosystemic shunts develop with preferential venous drainage through collateral circuits. A hepatic–venous pressure gradient of >12 mm Hg is associated with increased risk of variceal haemorrhage, and a pressure gradient >20 mmHg is associated with a fivefold increase in mortality.1 Common sites for the development of varices are the oesophagus and gastric fundus. It is important to note that portal hypertension can occur in a variety of non-cirrhotic conditions.2

Duodenal varices can be difficult to visualise on endoscopy as they are often located submucosally and towards the serosal surface of the duodenal wall and are of short length and small diameter (Figure 1A); they may become more apparent as portal hypertension progresses. The identification of ectopic varices should prompt high-quality biphasic imaging in order to delineate the vascular anatomy of the liver and assess portal venous inflow and options for variceal therapy through endoscopic, radiological or surgical means. Use of non-selective beta blockers should be considered as first-line therapy, although data supporting this approach are limited. Bleeding from ectopic duodenal varices is a rare but serious complication, and comparative studies informing best approach to practice are lacking. Here we present our recommendations and practice for the management of duodenal variceal bleeding (Table 1, Figure 2).

Bleeding from varices at any site of portosystemic collateralisation is a related to a combination of variceal size, wall tension and transmural pressure. Patients with evidence of portal hypertension who present with acute gastrointestinal haemorrhage should be managed according to protocol algorithms outlined in the British Society of Gastroenterology (BSG) guidelines on variceal haemorrhage7 and the BSG and British Association for the Study of the Liver decompensated liver disease bundle.8 Evidence supports large-bore intravenous access and the administration of broad-spectrum antibiotics, splanchnic vasopressors and targeted blood product support with restrictive transfusion strategies in settings of non-massive variceal haemorrhage.

Endoscopic evaluation of duodenal varices requires a high index of suspicion and should always be considered in portal hypertensive patients where a source of bleeding has not been identified after careful inspection of the oesophagus and gastric fundus. In suspected ectopic variceal bleeding, intubation to the distal duodenum with push enteroscopy should be attempted, as duodenal varices are often located in the descending duodenum beyond the limit of standard procedural intubation. Further measures to evaluate suspected ectopic variceal bleeding include colonoscopy and either double-balloon enteroscopy or video-capsule endoscopy. Endoscopic ultrasound (EUS) is a useful adjunctive technique to evaluate for the presence of duodenal collaterals and to guide therapeutic intervention.

Where stigmata of active or recent haemorrhage (white nipple, red signs) are present, first-line treatment should be endoscopic variceal band ligation (VBL) or cyanoacrylate injection (ECI).9 VBL has been used with success in the management of duodenal variceal haemorrhage,10  but may be challenging depending on the location and size of the varices, visualisation, isolation of afferent vessels and engagement with the banding cap. and early rebleeding after endoscopic band ligation has been reported.11–13 ECI is efficacious in achieving haemostasis in patients with actively bleeding duodenal variceal haemorrhage and preventing early and long-term secondary haemorrhagic episodes (Figure 1B).14 ECI can be associated with complications, including retrograde expulsion of glue with systemic embolisation, which commonly affects the pulmonary vasculature, and local complications of ulceration, erosion and extrusion and reports of glue plugs forming a nidus for chronic infection.15

EUS-guided therapy is gaining increasing traction in the management of gastric and ectopic varices. Colour Doppler EUS has the advantage of being able to confirm obliteration of vascular flow. EUS-guided ECI of gastric varices was associated with significantly reduced rates of late rebleeding in a retrospective series (19% vs. 45% after treatment without EUS, p=0.0005).16 Coil embolisation guided by EUS has similar efficacy to EUS-guided ECI in the prevention of recurrent gastric variceal bleeding (95% vs. 91%) and significantly fewer complications (58 vs. 9%), predominantly by reducing those related to portosystemic glue embolisation.17 ECI may provide a scaffold against which smaller volumes of cyanoacrylate glue can be injected.

Transjugular intrahepatic portosystemic shunt (TIPSS) procedures establish communication between the portal and hepatic veins, which reduces the portal gradient and risk of variceal haemorrhage, and is efficacious for treatment of duodenal varices.18,19 TIPSS can be combined with transvenous obliteration of varices, either contemporaneously or in the setting of rebleeding.20 This procedure is associated with complications relating to encephalopathy (reported in up to 36% of patients), hepatic decompensation (Figure 1C), right heart failure and shunt occlusion, and patients should receive a comprehensive evaluation, detailed venous mapping, and specialist hepatological opinion prior to proceeding to radiological shunt procedures.

Balloon-occluded retrograde transvenous obliteration may be used to treat acute ectopic variceal haemorrhage refractory to endoscopic haemostasis or in patients who are deemed unsuitable for TIPSS. Retrograde selective cannulation of varices through a cannula sheath in the inferior vena cava can be used to access and occlude upstream varices, delineate the vascular anatomy and inject a sclerosant (Figure 1D).21,22

Rarely, endoscopic and/or radiological measures fail or are technically not feasible. Revascularisation procedures and various non-selective portosystemic shunts have been successfully utilised to control variceal haemorrhage in carefully selected patients.23 Surgery for portal hypertension should be performed by experienced surgeons in specialised units and patients should have relatively preserved liver synthetic function.24,25 Liver transplantation remains the only modality that manages portal hypertension whilst simultaneously treating the underlying liver disease.

Duodenal varices are rare but challenging causes of portal hypertensive bleeding. They occur in settings of cirrhotic portal hypertension in addition to extrahepatic portal vein occlusion. Duodenal varices require a high index of suspicion in the setting of suspected variceal bleeding where oesophageal and gastric bleeding has been excluded. Endoscopic therapy remains the primary treatment modality for duodenal variceal haemorrhage. Detailed contrast-enhanced imaging is required to delineate splanchnic venous anatomy and plan rescue treatment. Second-line treatment strategies in settings where endoscopic therapy has failed should be undertaken in discussion with specialist hepatology centres, and include TIPSS, variceal obliteration, devascularisation and surgical shunt. 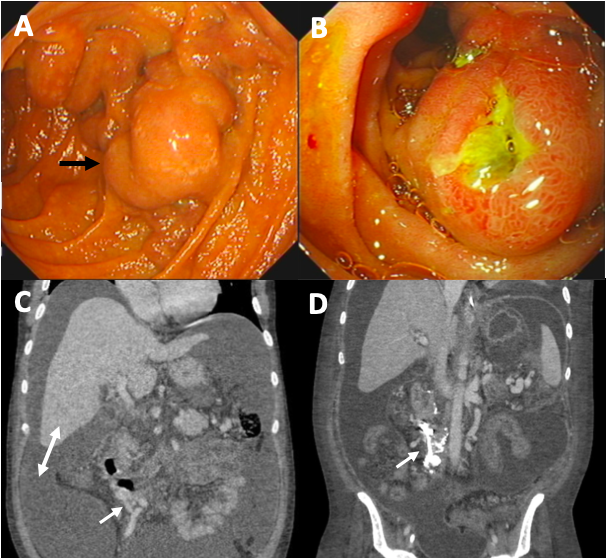 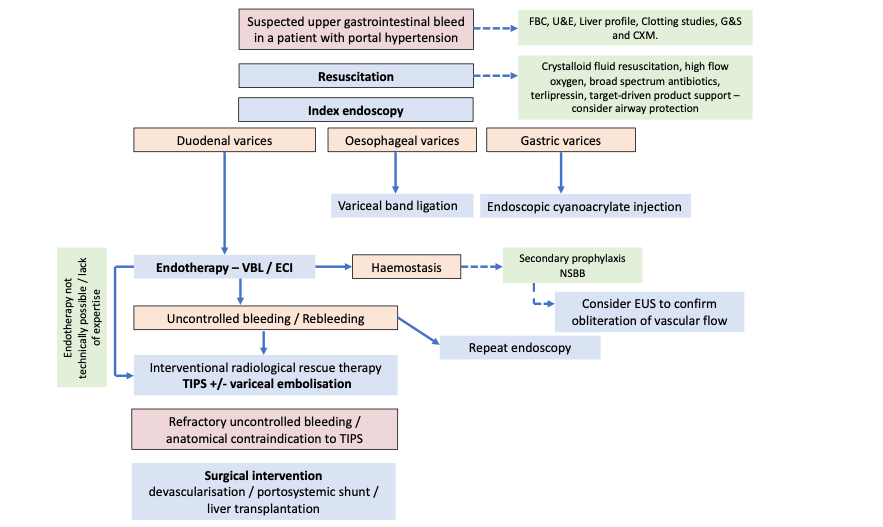