Summary of the service story

Bowel scope screening for colorectal cancer has been demonstrated to be an effective intervention which reduces incidence and mortality and the UK has been in the process of establishing a comprehensive programme since 2013. However, uptake has been below the levels seen in clinical trials, which reduces the overall effectiveness of the programme.

St Mark’s Hospital Bowel Cancer Screening Service’s (BCSC) uptake for bowel scope stood at 40%. The BCSC sought to increase its uptake rate by engaging with participants who had previously not responded to the invite for bowel scope screening upon their first invitation.

How we managed the challenges

Our previous RCT reported the beneficial impact of reminders, which offer non- responders (DNR) and non-attenders (DNA) to arrange a new bowel scope appointment at 12 months after the first invitation. We were successful in a CQUIN application to send a 12-month reminder letter to DNAs and DNRs during 2017/18. 5078 participants were sent reminder letters with the option of indicating preferred days and times and the preference of gender of clinician, to reschedule their BSS appointment. Participants wishing to book an appointment could either fill out a return slip and post it back in a prepaid envelope or call the screening centre directly to book their appointment.

Between April 2017 and March 2018, 5,078 men (n=2649, 52.2%) and women (n=2429, 47.8%) were sent a self-referral reminder on the anniversary of their invitation. The overall uptake was 8.7% (n=441). The only significant predictor was past behaviour, with previous non-attenders (individuals who previously indicated that they would attend BSS, but failed to show) being significantly more likely to book and attend an appointment than previous non-responders (individuals who had not previously indicated that they would attend BSS); uptake was 16.5% and 7.6%, respectively (adjusted Odds Ratio [aOR]: 2.45, 95% Confidence Intervals [CI]: 1.95, 3.15; P: <0.001). Among those who attended screening, 191 (43.3%) had no abnormalities detected, 64 (14.5%) had polyps with no other pathology (such as haemorrhoids or diverticulitis), 34 (7.7%) had polyps and other pathology, and 150 (34%) had other pathology without polyps. Among those who had polyps detected (n = 98), 61 had at least one adenoma, of which 45 had adenomas classed as ‘low risk’, 6 had adenomas classed as ‘intermediate-risk’ and 10 had adenomas classed as ‘high risk’ (the overall adenoma detection rate among the screened population was 13.8%; the mean number of adenomas detected per person screened was 1.7). Twenty-three individuals were referred for colonoscopy; the majority (60.9%; n = 14) were subsequently referred for surveillance. One person was diagnosed with cancer.

The implementation of a 12-month self-referral reminder at St Mark’s Hospital led to a substantial number of additional men and women being screened, as well as the detection of a significant number of adenomas requiring clinical intervention. Evidence also suggests that the interventions could reduce existing inequalities in bowel scope screening uptake between men and women. St Mark’s BCSC continues to send previous non-responders reminder letters at 12 months, with over 8,500 letters being sent this year. The change to the standard patient pathway to include this intervention has led to an increase in the bowel scope screening uptake rate, is evidence-based and contributed to the reduction of bowel cancer morbidity and mortality in the local population.

See table one below 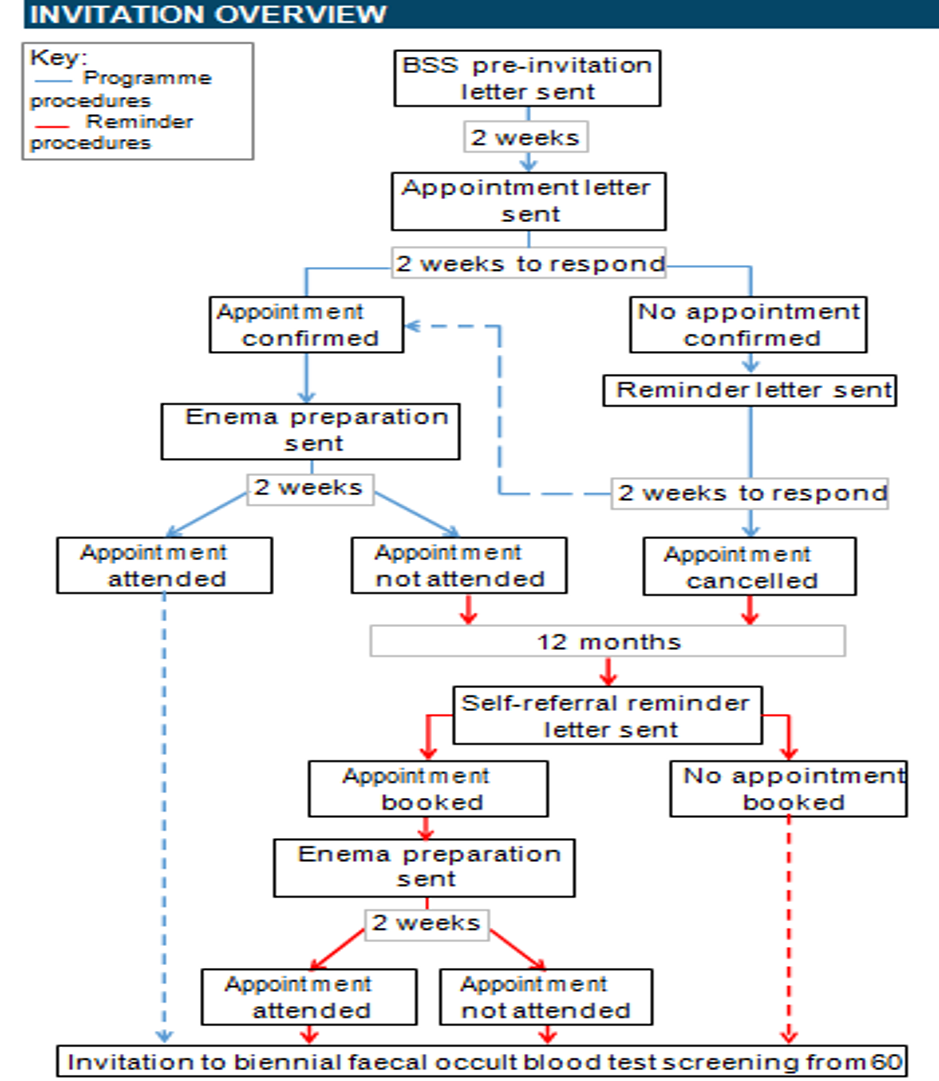 Participants were men and women, living in Brent, Harrow and Hillingdon, who did not attend a BSS appointment within 12 months of receiving an invitation from the screening programme.