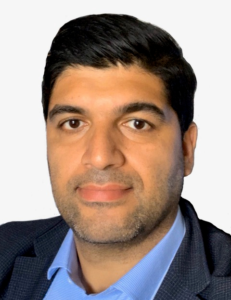 As a medical student at the University of Leicester – I knew as soon as I started doing clinical rotations that I wanted to be a hospital Physician. I liked the problem solving, the clinics, and the procedural aspect of working with patients. After qualifying in 2003 and doing my house jobs locally in 2004-5, I worked in Australia for year at Royal Prince Alfred (RPA) hospital in Sydney in 2004-5. RPA was the national Liver transplant centre, during a rotation in ITU I saw lots of very poorly patients with liver disease – an early introduction to Gastroenterology.

On my return to the UK, I worked first in Liverpool and then in Leicester and found myself in the situation of enjoying several specialties but not being sure of which one I wanted to do as a career. Around the time of doing my PACES MRCP exam and working for the Gastroenterologist Richard Robinson, I found myself enjoying IBD clinics and realised that Gastroenterology was for me! After 8 years as a Registrar, working in Coventry, Leicester, and Kettering, and doing an endoscopy fellowship and then an MD, I was appointed as a Consultant in Kettering, Northamptonshire in 2015.

I love being a Gastroenterologist. I love the variety of the job; no two weeks are the same. I have specialised in endoscopy including ERCP, IBD, early colorectal cancer, and clinical research. Following the lives of patients with inflammatory bowel disease over years is rewarding and the research part of my role is great, being involved in studies as we seek further evidence for Gastroenterology practice is exciting. I can do clinical research in parallel to my clinical work and I am the Specialty Lead for the CRN in the East Midlands and the interim R & D director for Kettering General Hospital.

When I first encountered UK Gastroenterology, the specialty was male-dominated with most of the senior regional and national roles being held by white Gastroenterologists. Gastroenterology over the last 15 years has become incredibly diverse with approximately 1/3 of Consultants being from a South Asian background (like myself – a British Indian). A large proportion of our trainees are female. The BSG is embracing the diversity and I am proud to be the deputy chair of SWiG which looks to promote gender equality – and in the future equality irrespective of ethnicity, sexuality and disability. Things are changing for the better for diversity and inclusion.

The best advice given to me during my career is not to be afraid to do new things. I have always heeded this advice. I am proud to be the chair of the New Consultants Committee at the Royal College of Physicians. The career of a Gastroenterologist is long and varied and I am excited about the future.

I became a member of the BSG as a trainee and love attending BSG events – a great opportunity to meet friends and colleagues and to collaborate. I have worked on various projects within the BSG “family” (I increasingly see the BSG as a family – especially through the COVID pandemic) and am proud to be an elected member of the colorectal and SWiG sections – I look forward to being a part of the BSG family throughout my career.