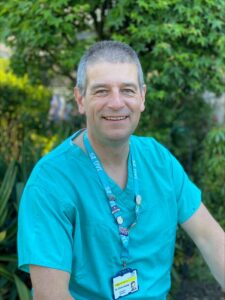 Chris Healey is a Consultant Gastroenterologist and Chair of JAG Accreditation RCP London.

I came across some very interesting cases when I was a medical student. On my first surgical attachment in the Sheffield hospitals, my first patient had Crohn’s disease, and my second patient had ulcerative colitis. So the first patients I spent a lot of time with as a young, enthusiastic medical student had these two diseases and they were fascinating because of what they were doing to these patients and they weren’t curable. That was the point I became interested in gastroenterology. Throughout my medical career, I was more a physician than a surgeon, although I did get my best marks in surgery.

I ended up thinking about becoming a respiratory physician and I went off to do an SHO job in city hospital in Nottingham, and we changed jobs there every 3 months. The one where I was best looked after and had the most fun was gastroenterology, and at the time there was a young new senior registrar called Alistair McIntyre, who went on to become the staffing guru for the BSG. He was really enthusiastic and a very kind mentor so it was him who cultured my interest in gastroenterology. When I was an SHO, I did a blind liver biopsy on the ward and I actually managed to hit some carcinoid tumours and it was as if it was meant to be. I was seeing really interesting patients and I remember having a patient with extra hepatic portal hypertension who was a 17-year-old young man, just a fascinating case. I transfused over something like 140 units of blood over a 6-month period because he kept bleeding. There were some really interesting cases and they gave me an insight into the breadth and depth of gastroenterology. That was the first reason, and once I started training as a gastroenterologist, I actually seemed to have some degree of aptitude to become an average gastroenterology endoscopist so I quite enjoyed it. It was one practical skill I seemed to have a little bit of aptitude for, and the rest is history. It was really interesting to see the breadth of diseases in the field.

When I did my research as a medical registrar, I developed an interest in hepatitis C right at the start of the disease being identified. Previously, it was a non-A non-B hepatitis, and the disease was first recognised to be due to HCV in fact when I was an SHO. I got involved with some of the earlier clinics at both Bristol and Oxford, and we didn’t have the ability to cure it. I’ve kept my interest in hepatitis C up until fairly recently, but the advancement that gave me the most interest at that point was the fact that we could cure a disease which we couldn’t at the start of it being identified. Throughout my career, I’ve seen a disease become established, recognised, its pathology understood, followed by slow treatment trials and slow progress, and then a little bit of hope, then a lot of hope. So now somebody with hepatitis C has a real chance of having their disease cured, and what’s more we might actually be able to eradicate it. For me, the greatest thing I’ve seen has been the hepatitis C progression.

Also, as I started to do more work in gastroenterology in a district general hospital, a big challenge was a big group of IBD patients so it goes back to my patients with Crohn’s and colitis and the molecular revolution. All the biological drugs that have come up over the past 20 years means they are getting a broader choice. It’s wonderful now to start having treatments that really make an impact on these patients and it’s just gotten better and better. I’m really enjoying treating my patients, it’s a real privilege. We don’t send them as frequently to the surgeons and they do have a better quality of life and we can actually tell them that we can do stuff for them. We can be very pessimistic about some things in the world, but actually there is real progress in gastroenterology.

It’s definitely interacting with patients, there’s nothing better. There are two places that I enjoy that the most. The first would be in clinics, and as a gastroenterologist in a district general hospital and having had the breadth of my training, I’ve got patients of all sorts. Much more gastroenterology is specialised now, but that breadth of patients is actually why I enjoy my clinics. I go out and see lots of different conditions. I have the experience now to know when to do certain things and when to worry, also to have confidence in that is great and you can communicate that to your patients and build a nice relationship with them over time.

Quite a few of the patients I’ve looked after with IBD or even hepatitis C I have known for many years now, it makes a real difference. The other area I love meeting my patients in is when I’m doing my bowel cancer screening colonoscopy. Our patients are minimally sedated, if at all, and they’re often terrified and very anxious coming into the room and you’re sometimes doing a long and technical procedure on them if they’re got a lot of polyps. However, building that relationship with the patients and knowing what to say at different times means you do get a real reward out of doing the lists. They’re exhausting but they’re also great, it’s that patient contact that really makes a difference to me as a doctor.

To reflect on my career and say there have not been times that I have struggled would be a lie. Being a district general consultant when there was only two of us over a fairly big service was very difficult at times. If there was something I would change, I would support doctors better once they get to their consultant role. There’s a lot of emphasis, and quite appropriately, on training, mentorship, and pastoral care for junior doctors.

I think where it’s lacking, especially talking to my other colleagues, is actually in the model that we use once you’ve become a consultant. You can feel quite isolated at times and there are second victim issues if you have complications and there are also burn out issues. The change I would want to see is to make the profession kinder for older gastroenterologists like myself, a seemingly self-centred desire but then if you do that you’ll retain the knowledge and the benefits that you can have through experience and having seen things in the past. If we can keep people working longer in a job that they value, we all win, our patients in particular, and the NHS and the individuals win too.

Preparation is key to doing everything, and thinking through things.

I’ve been a BSG member for over 30 years. It’s been the place where you meet your village of fellow gastroenterologists and have the chance to exchange information with them. I’ve always enjoyed going to the BSG, it’s been the place where I’ve had the majority of my professional development. It’s provided me, together with its partnership with JAG, in supporting me and enabling me to take my role beyond my original hospital.

One challenge for all doctors is to look at their own practice, within their unit, hospital, and even in a broader sense. I’m not naturally an academic, but you can influence things beyond your hospital, not just by doing papers, but by being involved in endoscopy quality assurance. I’ve been fortunate enough this year quite late in my career to get onto the Endoscopy Committee. It was something I never really thought I wanted to do. I was too busy in my forties, but in my fifties in trying to deal with some of the issues of burn out and redirection, I sought to be elected to the BSG Endoscopy Committee and I hope I can contribute there for the next two years.

How has neurodiversity affected you in your career?

There have been times in my career where I’ve struggled due to the administrative and IT demands in managing a busy clinical job and that’s gotten worse over the last 10 years. I’ve found my interaction with NHS IT systems quite difficult, and there have been several times both in my school and undergraduate education when there were suggestions that I had issues with dyslexia. I finally got the diagnosis this year and reflecting on the difficult moments in my career, it certainly had a huge role in that.

I left it undiagnosed having had it recognised at university and it might have been one of the reasons why I never completed my MD thesis. I have a problem with procrastination and written work and a lot of it is down to finding it extremely difficult to do that. It’s quite interesting having that insight now, and there will be other gastroenterologists, endoscopy nurses etc. who have issues of ADD, dyslexia, or dyspraxia and they shouldn’t get put off. You can still have a very successful career and having insight enables you to protect yourself, as well as cope and understand how you react to things. That’s been an interesting road of discovery over the last year.

If you are interested in taking part in our Meet our Members initiative, please contact the BSG Communications team.